Prerequisites: Should have a good understanding of Treaps (both Vanilla / BST and Implicit), along with some basic understanding of BSTs and Segment Trees. I had given a presentation at work which can serve as a good starting point. You can also refer to the following tutorials: Vanilla Treaps as BST, Implicit Treaps, or the original research paper.

If you are familiar with Treaps in Competitive Programming context, you’d know that there are two main operations that a Treap fundamentally supports— split and merge.

Similarly, the merge operation takes two treaps, say L and R, such that all values in L are ≤ all values in R, and merges them to create a new Treap T.

What if instead of modifying those O(log(N)) nodes, we created new nodes every time a modification is necesssary? That’d give us the following:

The first and last property above are sometimes used in hard contest problems. However, before going to the problems, let’s see how persistent treaps work and look like:

Let’s consider the case for Implicit Persistent Treaps with the following arrays:

Implicit Treaps don't store the BST values explicitly and instead infer them from the subtree sizes. These are used for doing operations on arrays, and allow you to perform pretty mind-boggling stuff in O(log(N)) time, like reversing a sub-array, transplanting a sub-array within the array, etc. while still supporting range aggregate queries like sum, min, etc. in O(log(N)).

The array we get after merging A and B will be:

Let’s say the corresponding treaps for the above arrays are called TA, TB, TAB. Moreover, assume the aggregate function we have to maintain is simply sum to answer range sum queries over the arrays. 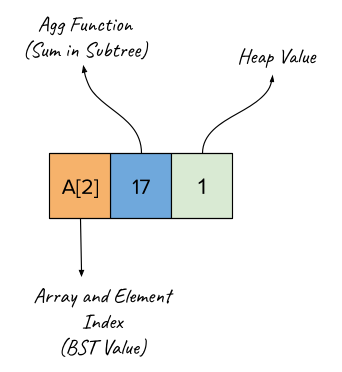 Let’s say treaps TA and TB look as follows. Note that the heap values are generated randomly, and hence we can get a different treap for a given array every time. Also, the treaps in this tutorial are min-heap ordered.

Now if we call merge for the treaps TA and TB, the first merge call will pick the node corresponding to A[2] since that one has a lower heap value (11). Moreover, as is the case usually with merge operations , if we pick the treap on the left (TA), we will keep it’s left-child as is and call merge with the left treap’s right child (A[4]) and the full treap on the right (TB or B[1]). This looks as follows:

Now, we will pick the node corresponding to B[1] since that one has a lower heap key (21), keeping its right child as is and calling merge with its left-child. This looks as follows: 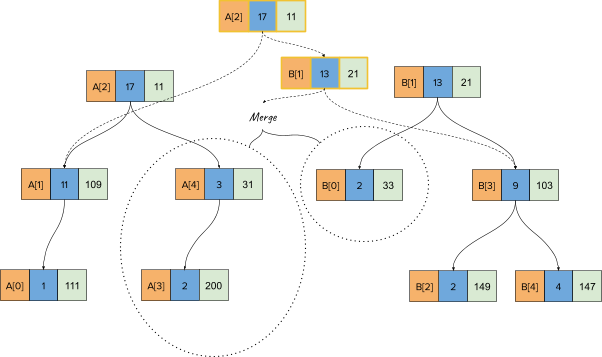 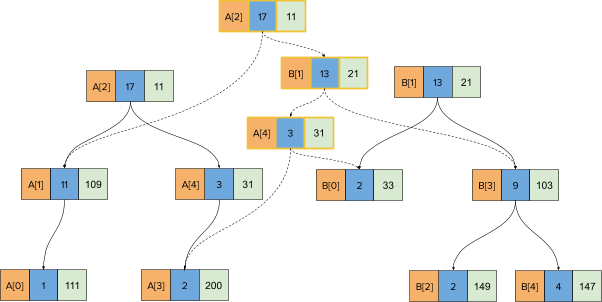 When the recursion stack returns, the aggregate functions will be corrected for the nodes to yield this final state: 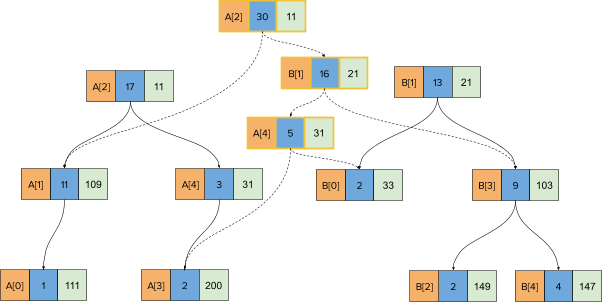 Note that the number of new nodes created is O(height(TA) + height(TB)) which is O(log(N)) with a fairly high probability.

This is how treap TA initially looks: 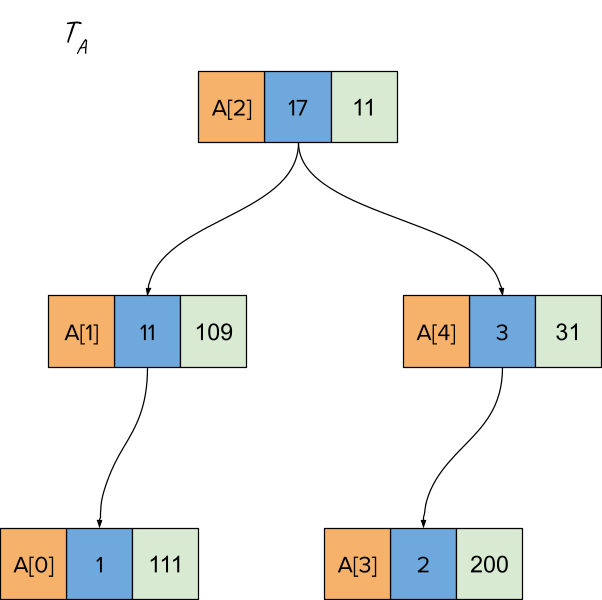 In the first call for split, since the node A[2]’s BST Value (array index, i.e. 2) is less than the splitting key (which is 3), we create a new node and make this the root of the left treap. The recursive call for split is made for the sub-treap rooted at A[4] (as shown below). 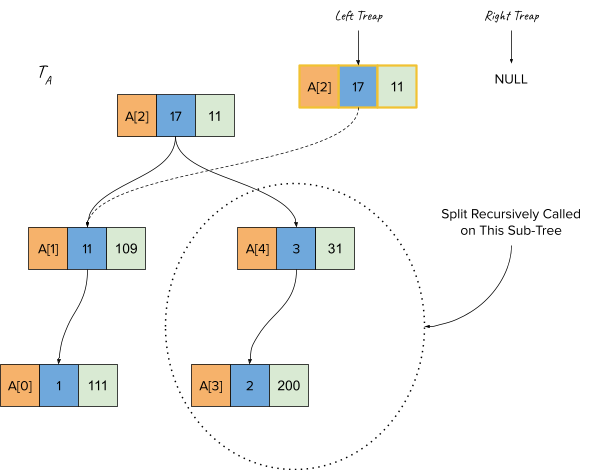 Now, the split operation is called for node A[4], and since that has a higher BST Value (4) than the splitting key (3), we make this the root of the right treap and call split on the left sub-treap of A[4] (i.e. A[3]) 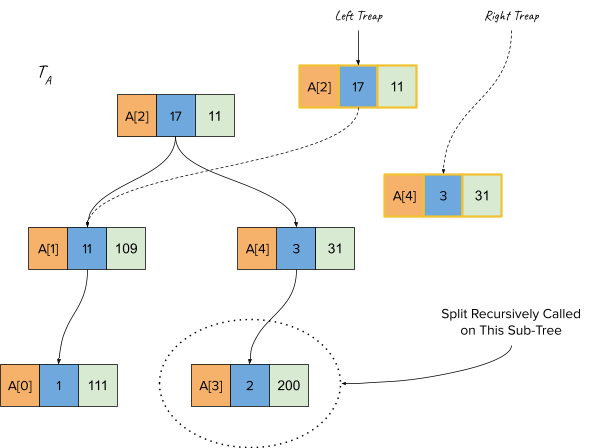 Finally, the split call reaches A[3] and since its value is <= splitting key, we make this the right child of the left treap. 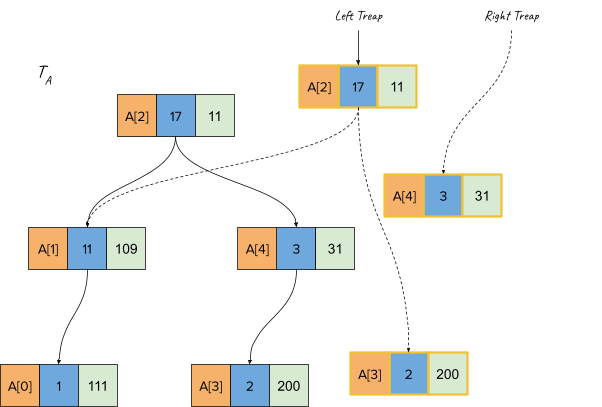 Finally, when the recursion stack returns and the aggregate function (sum) is recomputed, we get the following final treap: 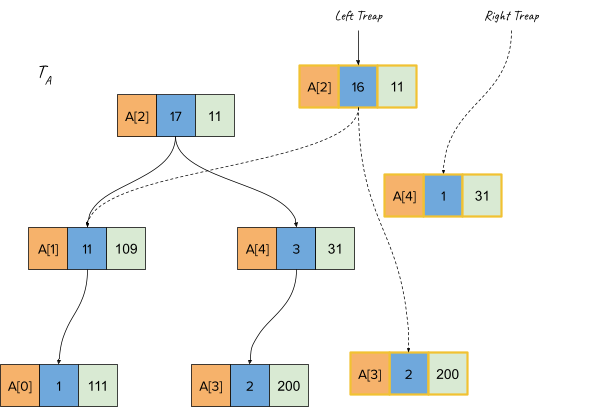 You are given a bunch of DNA sequences (in a list called L), and you have to support the following operations:

This is a direct application of persistent treaps. The aggregate function will need to track sum for each of the 4 bases (AGCT). You can find my Accepted implementation here: Gist on GitHub

You can see the split and merge methods below, which create a new node for every visited node:

This question also requires you to support point updates (setting a given element to a given value). This can also be done by keeping the treaps immutable. Refer to the point_update method in the implementation.

One important caveat for my linked solution (and even other implementations for this problem) is that there are some memory leaks (Can you figure out where?). However, the memory limit is high enough that it doesn’t become an issue.

You are given an array with N (<= 2e5 elements) and you have to support the following 3 operations:

This is a custom-built theme for Jekyll. Please report any issues on GitHub.